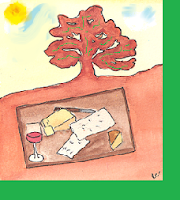 What’s better than enjoying an afternoon with friends in Steinbeck’s pastures of heaven country?  Nothing.  LC and MK took a jaunt to visit friends, Jeanne and Rich. They and partner Michael make their own small-batch wines called Fletcher Ridge Wines.   We were invited to taste and “blend” our own wine.  Little did we know that Michael would also be at the picnic table with a beautiful platter of cheese and crackers, and a head full of ideas about food and wine, one of which is, “good wine is what you like.”  We agree.
In order to blend, we first had to taste the four reds available.  Their 2009 Syrah is made with organically grown grapes from a vineyard in Arroyo Seco.  The Syrah was delicious and we could have stopped there, but the 2009 Cabernet Sauvignon made from grapes grown in St. Helena and Rutherford was also quite good.  The third was an earthy Carignan, a grape widely grown in France and often used for blending.   The fourth was a sweet, late harvest Zinfandel that had been aged two years in French oak and had a lovely smooth finish.
After tasting all the reds, we got to blend.  LC and MK were given a beaker and got right to it.  After much mixing and matching, we ended up with a blend of 50% Syrah, 30% Zinfandel, then 20% Carignan topped off with 10% Cabernet Sauvignon. It was a deeply ruby-colored wine, a touch on the sweet side, but full bodied and perfect for our palate.
For our cheese tasting experience we had three choices of cheese and two kinds of crackers.  The cheeses were:  East of Edam, made in Salinas; Pecorino Calabrese, a sheep milk cheese from Italy; and Oregonzola, an earthy blue from…you got it, Oregon.   The crackers were La Panzanella, original and rosemary, Croccantini.   We highly recommend each and every item on the platter.
For our wine-cheese pairing, Michael had a tasting experiment in mind.  Have a sip of wine, then a bite of cheese.  Then clear the palate with a cracker.  Then, have a bite of cheese, followed by a sip of wine.  In both cases, the wine and cheese tasted different.  So, birth order does count!
Then, Rich had us see the improvements to his wine cellar which made us want to go home immediately and start digging.  But better yet, we watched the golden sun set over the ridge and toasted our gracious hosts along with our good fortune.   How lucky we were to share the love of wine making with friends.
Posted by mk at 9:13 PM 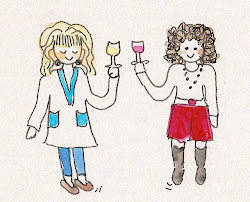